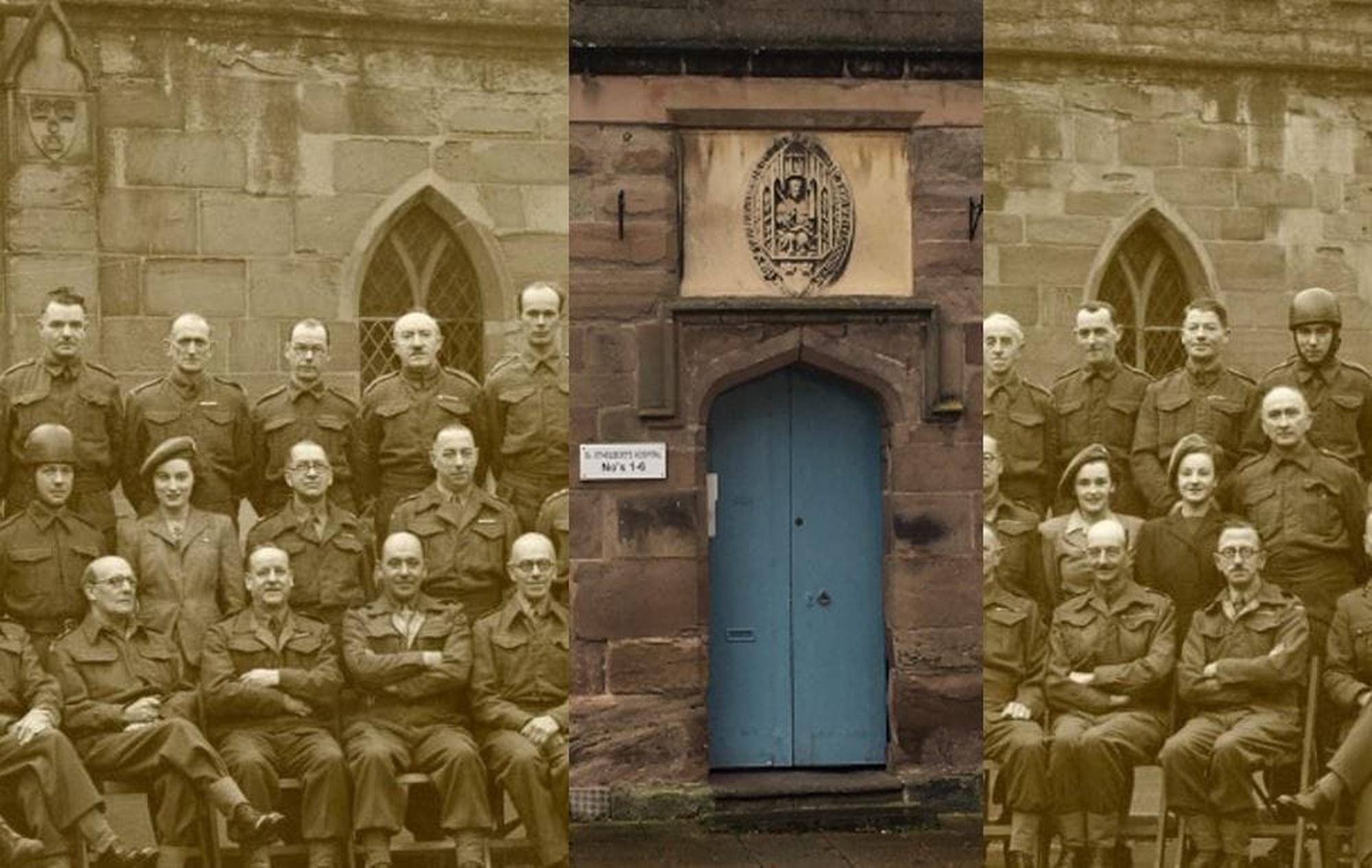 T﻿hie month's feature is a photograph of the Headquarters of Hereford Sector Home Guard taken during the Second Word War outside St Ethelbert's Almshouses in Castle Street.

T﻿his months comparison is of the Rotherwas HQ and Admin HQ Staff during the First World War and in 2022 when it is a civilian office block. Unfortunately the tree planted in the garden in front of the main door prevents an exact replication of the original photo.

T﻿his month's feature is Suvla Barracks. Established as the Militia Barracks in 1869 and becoming the Battalion HQ of The Herefordshire Regiment on its formation in 1908. Most of the site is now Suvla Barracks and the home of 2 Platoon, A Company, 6 Rifles.

T﻿his month's comparison shows the proclamation of Her Majesty Queen Elizabeth II being read out, in Hereford by the Lord-Lieutenant (Sir Richard Cotterell) on the steps of the Shire Hall in 1952. The proclamation for King Charles III could not take place on the Shire Hall steps due to building work and took place outside the west door of the cathedral.

This months photos compare one from the 1937 Coronation celebration in The Homend Ledbury in May 1937.

It's not clear who is leading the parade, but following s the town band and then C (Ledbury) Company of The Herefordshire Regiment.

The modern photograph (courtesy of google maps) clearly shows the change of use of the buildings. The old cinema which was plastered in 1937 is now restored to its 'black and white'. The outfitters Brays, once a major name in the town has gone and replaced by Janey's cafe and a branch of the TSB!

This month’s photographs are taken at the Rose & Crown pub in Tupsley.

The first is of the C Company of the 3rd Battalion of The Herefordshire Home Guard, winners of the Battalion Efficiency Cup in May 1942.

The second series of pictures were taken (on a rainy day) in May 2022. New houses have been built and the original photographer’s position is in a private garden, additionally the pub has had a flat roofed extention built. However the distinctive tiles, shape of the roof and the houses on the opposite side of Ledbury Road confirm the location.

This months feature is Canon Frome Court - this was the home of Lt Gen Sir Edward Hopton - see this month’s feature ‘the man behind the medal’.

The original photograph shows: Colonel Hopton, Colonel Wood, Lt Gen Sir William Pitcairn-Campbell and Colonel Pateshall at the entrance to Canon Frome Court - presumably before entering for lunch or a reception after the unveiling of the War Memorial at Ashperton on 2nd October 1921.

Colonel Pateshall was the Honorary Colonel of the Herefordshire Regiment, he had served on the staff of 159 Brigade at Suvla Bay and in the Middle East and was to become known as the ‘father of the Regiment’.

Born in 1858, the only son of Captain John Dutton of Farnshill Park, Radnor, he attended Harrow and Sandhurst. In 1899 he married Sybil Maude, eldest daughter of Walter Mynors Baskerville of Clyro Court and granddaughter of John Hopton of Canon Frome. Assuming by Royal Licence the name of Hopton, the Colonel gained ownership of every house in Canon Frome and five farms of over 400 acres.

Colonel John Dutton Hunt Hopton was such a tall man it was said that servants had to stand on an orange box to clean his washbasins - in the photograph he seems a ‘large man’!

An expert long-range shot, he extended his private rifle range in 1928 by making a clearing in the trees of Meephill. The target was now exactly 1,500 yards away north-east across the valley and beneath the wood at Old Birchend. An impressive figure in his white spats, the sharpshooter lowered his 6ft 6ins frame into the bluebells for his first shot at the new distance, took aim and scored a bullseye. Apparently satisfied with this effort, he quietly packed up and went straight back home again.

Hopton captained the British rifle team at Bisley and in the year after leading them on a successful tour of Australia, he took part in the 1908 London Olympics. In the men’s 1,000 yard free rifle competition he scored 84 out 100 with his 20 shots. He shot 36 times for England in the annual match for the Elcho Shield, the oldest and most prestigious long range rifle contest in the world; held between England and Scotland from 1862, with Ireland joining in 1865 and Wales in 1991, the 'Hopton' is still among its awards.

The marksman was also a keen musician. A cellist, songwriter, and a director of the Royal Academy of Music, his song Ceylon Whispers was often played at Bisley. In 1914 he installed an organ in a purpose-built music room at the Court.

It was made by Jardines of Old Trafford and the model favoured at the time by the organists of Hereford, Worcester and Gloucester cathedrals.

The Hoptons entertained the conductor John Barbirolli, a noted Elgar interpreter, and the pianist Myra Hess.

When he died in 1934, John Hopton was buried at his own request in a mausoleum at the point where he fired his rifle. The service was conducted by the Bishop of Hereford, with rifle range flags at half-mast. It had been intended that his wife would lie there with him, but she died at Cannes during the Second World War and it was impossible to bring her body home for burial.

During the second World War the Home Guard set up a more modest firing range below Meephill and the gamekeeper would put out warning flags when they were practising. The coppice on Meephill maintains a mask around the marksman’s Mausoleum. Foliage now obscures the lines of sight, but, in spring, primrose, daffodil and bluebell bedeck the approach.