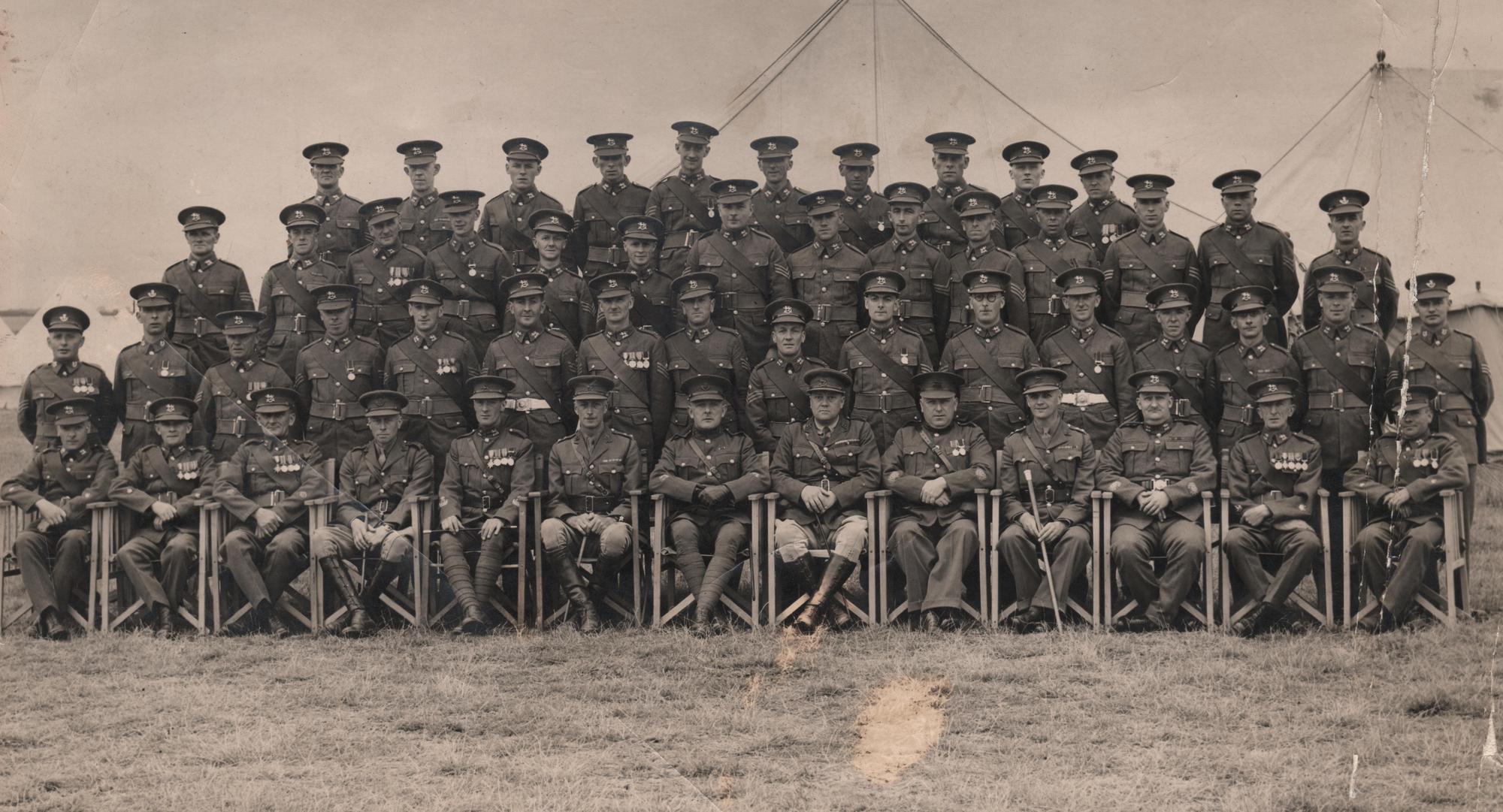 In the original proposals the Herefordshire Regiment was to re-form as a heavy artillery unit, but following vigorous protest throughout the county it reformed as an Infantry Corps of the Kings Shropshire Light Infantry. This post-war reorganization led to the severance of the association with Radnorshire, which had existed since 1860. In Radnorshire, the TA were reformed as a Field Artillery Battery, part of 83 (Welsh) Brigade RFA with 53 (Welsh) Infantry Division.

The 1st Battalion the Herefordshire Regiment was under the command of Lt Col. H.E.P. Patteshall DSO who had a distinguished military record, and formed part of 159 (Welsh) Border Infantry Division. The remaining battalions of the brigade were 1st, 2nd and 3rd Battalions of the Monmouthshire Regiment.

At the time of the railway strike in 1921, feelings were running high and there was fear of civil disturbances. The TA as such was not called out but a Defence Force was formed of volunteers from the TA. The Herefordshire Regiment assisted with this force by forming a Herefordshire Company of 5 Officers and 57 other ranks under Lt Col. A.M. Boulton DSO; it was officially designated responsible for guarding vital points and safeguarding essential supplies. There were no serious disturbances.

There is little of historical interest to record relating to the interwar period; it is sufficient to say that the battalion carried out its normal training and attended camp regularly. In these activities it fully maintained its reputation, both for military efficiency and sport, and it secured many trophies.

The Herefordshire Regiment maintained its separate status and did not adopt any of the honours of the parent corps, nor did it become light infantry. (However, the honour of becoming light infantry was conferred on the regiment on 28 May 1947). The status of the Herefordshire Regiment within the Corps of the KSLI was a peculiar one in that it was not only a territorial 'county regiment', but also a heavy infantry regiment, whereas its parent corps was not only a light infantry regiment but also a royal regiment, having the distinction of wearing the blue facings. These differences were further accentuated by the fact that the title of the parent corps did not include reference to Herefordshire.

After further consideration of all the circumstances of the case the adjutant general recommended that the proposition should not proceed. This recommendation being accepted, the colonel of the regiment notified the Lords Lieutenant of the counties of Shropshire and Herefordshire of the decision in April 1934. In doing so he made specific mention of the fact that the Herefordshire Regiment (TA) did not desire any change to be made in its status or title.

The Herefordshire Regiment was well supported during the interwar years and in 1927 the members of the band were issued with full dress for the first time since 1914. The scarlet tunics with green facings added a welcome splash of colour to the battalion parades. In 1929 recruiting was greatly assisted by the use of a film depicting the history of the regiment, which was produced by the commanding officer, Lt Col J.L. Sleeman CMG CBE MVO, who had taken over command from Lt Col H.E.P. Pateshall DSO in 1926. In 1929 the first reunion of the Herefordshire Regiment Old Comrades Association was held. This has since become an annual event. On 30 January 1930 Col M.J.G. Scobie CB VD TD DL died, aged 78 years. He was the first commanding officer of the regiment and, at the time of his death, the honorary colonel of the regiment. Lord Somers CMG DSO MC of Eastnor Castle succeeded as honorary colonel in 1932.

The 1st Battalion the Herefordshire Regiment comprised four rifle companies and a headquarters wing. B Company was the heavy weapons company, being at first designated (MG) and later, in 1934, support company (S). The order of battle in 1934 was as under-noted, Lt-Col. S.C. Tomlinson having taken over command in 1931 on the appointment of Col. J.L. Sleeman CMG CBE MVO to the command of 160 (South Wales) Infantry Brigade.

A Coy, Hereford (with a detachment at Weobley)

4 officers and 109 other ranks

3 officers and 92 other ranks

On 2 May 1935, 2nd Battalion KSLI laid up its old Colours in Hereford Cathedral, new Colours having been presented to the battalion by HRH The Duke of York in Shrewsbury on 25 April 1935. The guard of honour furnished by 1st Battalion the Herefordshire Regiment was commanded by Capt. J.H. Roberts. Lt. C.F. Wegg-Prosser and Lt. T. Holloway were on parade, the latter carrying the Regimental Colour.

On the occasion of the Coronation of HM King George VI on 12 May 1937, the regiment was represented by Col. S.C. Tomlinson, and a detachment including a street-lining platoon under Maj. B.S.W. Taylor DFC, and the Colour Party under Lt. F.W. Juckes.

The Coronation year will be remembered in the Territorial Army as that in which preparations for the Second World War commenced. 1937 saw the first serious attempt to mechanize the infantry battalions of the Territorial Army, and in that eventful year Lt Col. L.F. Sloane-Stanley succeeded to the command of 1st Battalion.

By 1938 the likelihood of war had greatly increased, and urgent steps were taken to increase the mobility of the infantry divisions. As a result the infantry brigades were reduced from four to three battalions, and in consequence 159 (Welsh Border) Brigade of 53 (Welsh) Division was reorganized as follows:

4th Battalion KSLI transferred from 160 (South Wales) Infantry Brigade in which it had served since 1920. 160 Brigade under the command of Col. J.L. Sleeman CMG CBE MVO had been chosen to take part in regular army manoeuvres in 1935, and as a result of the success of this experiment it had been decided to utilize the Territorial Army as a means of expansion in the event of a major war. This decision was in keeping with the true spirit of the Haldane Reforms and in complete contrast with the method adopted in 1914 when, it will be remembered, the Territorial Force was misused and in its place was raised the 'new armies'.

The Herefordshire Regiment responded magnificently to this appeal and the manner in which it prepared itself for war reflected great credit on those officers who had so patiently trained 1st Battalion during the interwar years. Deserving of special mention are the commanding officers Lt Col. H.E.P. Pateshall DSO, Lt Col. J.L. Sleeman CMG CBE MVO, Lt Col. S.C. Tomlinson and Lt Col. L.F. Sloane-Stanley; and the adjutants Capt. Sloane-Stanley of the Middlesex Regiment (who later returned to command the battalion), and Captains Green, Shears, Hallowes and Thompson, all from the KSLI.

The reorganization was gradual, and the first change was perhaps the most unpopular, when on 1 November 1938 B Company reverted to its role of Rifle Company and parted with its Vickers machine-guns. Headquarters Company was then reorganized early in 1939 when the establishment provided for six platoons:

Recruiting was brisk and a special staff was necessary to attend to the volunteers. The Mayor of Hereford made an appeal for recruits, and National Service demonstrations were staged throughout the county.

In April 1939, 1st Battalion the Herefordshire Regiment was divided to form 2nd Battalion, and the Regimental organization was as follows:

Lt-Col. N.G. Blake MBE was appointed to command 2nd Battalion. He formerly commanded B Company (Ross) of the original 1st Battalion, and he received his decoration in the 1939 New Year's Honours List.

On 18 May 1939 conscription was introduced in peace time for the first time in our history and under the provisions of the Militia Act (the Military Training Act 1939), every man reaching the age of 20 was liable for two years' compulsory service: six months with the Colours and eighteen months with the Territorial Army. The first 'Militiamen', so known, joined the Colours on 15 July 1939 and received their primary training at regimental depots. (This militia is not to be confused with the old Constitutional Force.)

The National Service (Armed Forces) Act followed on 2 September 1939 and provided that all able-bodied men between the ages of 18 and 41 were liable for military service for the duration of the war. The Regular Army, Territorial Army, Reserves and 'Militia' became thenceforth the British Army, and equipment, training and conditions were standardized. The Territorial Army, as such, was suspended, and members were required to remove from their uniforms the small metal T which they had so proudly worn on their lapels or shoulder straps to denote their non-regular status.

Certain vulnerable points laid down by the War Office were to be guarded by troops of the recently formed National Defence Companies (Territorial Army Reserve). In 1939 ex-servicemen between the ages of 45 and 55 were encouraged to enlist in a Reserve Company of their local Territorial battalion, which was to be formed for home defence. It was proposed to form a platoon in each large town in the county and enlistment was for four years, and the rates of pay and allowances were as laid down for the Territorial Army. On being called up for service in one of the groups of the National Defence Companies, men, if passed fit, received a bounty of £5. They were clothed, armed and equipped as in the Territorial Army, and British Legion Headquarters were asked by the War Office to assist in raising a force of 25,000 men. However, as it transpired, events moved too quickly and it was found impracticable to deploy the National Defence Companies, and initially most of the vulnerable points were guarded by Militiamen from the depots in Welsh Area.

1st and 2nd Battalions the Herefordshire Regiment formed part of 53 and 38 Welsh Divisions respectively, when on 1 September 1939 the order to embody was received at divisional headquarters. 1st Battalion had just returned from annual camp at Weston-Super-Mare (Locking) when it was embodied on 2 September 1939, and it concentrated in Hereford on the following day. 2nd Battalion was still attending their annual camp at Weston-Super-Mare on 1 September 1939, and it embodied on 3 September as part of 114 Infantry Brigade. The first week of September was a period of intense activity throughout the division, but by 6 September all units had moved to their civil defence areas, the first move in their long march to victory.