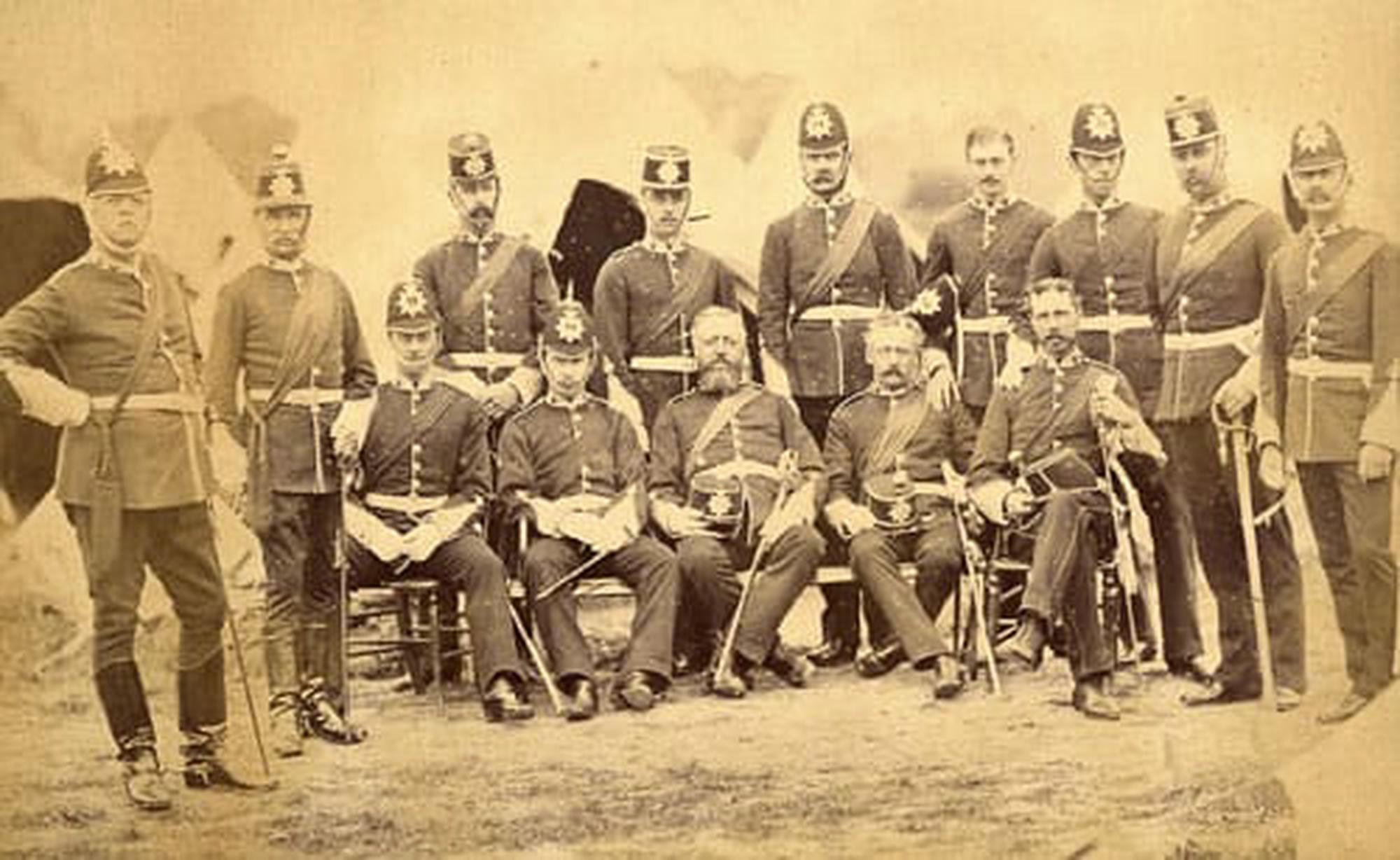 It will be appreciated that Volunteers were accepted in aid of the ballot for the Militia, first as individuals and then as separate companies, but those separate companies formed part of the Militia. However, following the outbreak of the war of the French Revolution in 1793, Volunteer Corps were raised independently of any Act and in addition to the Militia, and it is these Volunteer Corps that are the true predecessors of the Herefordshire Light Infantry.

The peace was short lived, and in 1802 another Act was passed, authorizing the raising of yeomanry and Volunteer Corps. The threatened invasion by Napoleon caused the rapid formation of a large number of Volunteer Corps, and, in Herefordshire, three troops of yeomanry cavalry and thirty-eight companies of infantry were raised in 1803.

The Colour is of green silk, being the facing colour of the regiment with the union in the upper canton. Painted in the centre of the field on a circle within a gold frame is the coat of arms of the city of Hereford, with crest and supporters above a three-part scroll bearing the motto Invictae fidelitatis praemium, all within the union wreath of roses, thistles and shamrocks. The size of the Colour was originally 6 feet 6 inches flying, and 6 foot deep on the pike, the pike being 9 feet 10 inches, inclusive of the spear and ferrule. The cords and tassels were of silk, crimson and gold mixed.

The Herefordshire Regimental Museum also possesses a side drum, believed to have belonged to the Ledbury Company of 1st Herefordshire Volunteers (1804). The shell is painted yellow and emblazoned with the badge, which comprises a lion rampant on a red ground, within a circle bearing the title 'Loyal British Rangers', all surmounted by the Georgian Crown and ensigned with the cypher `GR'. It is unusual to find the shell painted other than in the facing Colour of the regiment, therefore the drum may have seen prior service, but no regiment styled the Loyal British Rangers has been traced.

It will be realized that while mention has been made of the Hereford Yeomanry Cavalry and the Leominster Association Cavalry in order that the statement of the Volunteer corps in the county during this period will be complete, these cavalry units do not form part of the lineage of the Herefordshire Light Infantry.

The Herefordshire and Radnorshire Volunteer Rifle Corps,1859-60
Following the downfall of Napoleon, the foot Volunteers, with only two exceptions — the Honourable Artilver, in 1859, in consequence of the hostile tone of the French Army and Government and the defenceless state of Great Britain, they were revived as Volunteer artillery and rifle corps.

The establishment of the Volunteer Force was sanctioned by a War Office circular dated 12 May 1859, signed by Gen. Peel, Secretary of State for War. The main points stipulated that Volunteer corps should e formed under officers holding a commission of the lord lieutenant of the county; that all members would take an oath of allegiance; that the force should be liable to be called out 'under aims' in the case of invasion, appearance of an enemy force off the coast or in the event of rebellion arising out of those causes; that while so under arms, the members of the force would be subject to military law and entitled to pay 'in like manner as the Regular Army'; that officers disabled in service under those conditions should be entitled to half pay, while non-commissioned officers and men would be entitled to the benefits of Chelsea Hospital; and finally that members should not 'quit the corps' when actually on service, although they could do so at other times by giving fourteen days notice, and that they would be considered 'effective' on completion of eight days training in each quarter or a total of twenty-four days 'drill or exercise' each year.

In consequence of this circular, meetings were held in all of the principal towns in Herefordshire and Radnorshire with a view to forming Volunteer Rifle Corps, the services of which were to be offered to Her Majesty Queen Victoria.

It would appear that the initiative was taken by Nathaniel Kyrle Collins in Ross, where the services of the Ross Volunteer Rifle Corps (RVRC) were offered in November 1859. However, as they were not officially accepted until March 1860, the precedence of the Herefordshire Rifle Volunteers (RV) dates from that time. The Herefordshire Light Infantry is directly descended from the Herefordshire RV, and by virtue of this fact it celebrated its centenary in 1960.

In 1860 eight Volunteer Rifle Corps were raised in Herefordshire, and three in Radnorshire. The names of these VRCs, the dates when they were raised and the names of their commanding officers are listed below. The precedence number of the HRV was 69th, and that of the Radnorshire RV was 85th, as stated in the Army List of 1860.

The units raised were as follows:
VRC Date of formation Commanding officer

The uniform of the Volunteer Rifle Corps of Herefordshire and Radnorshire differed in style for each county but they were both grey with black facings, and the head-dress was the kepi.