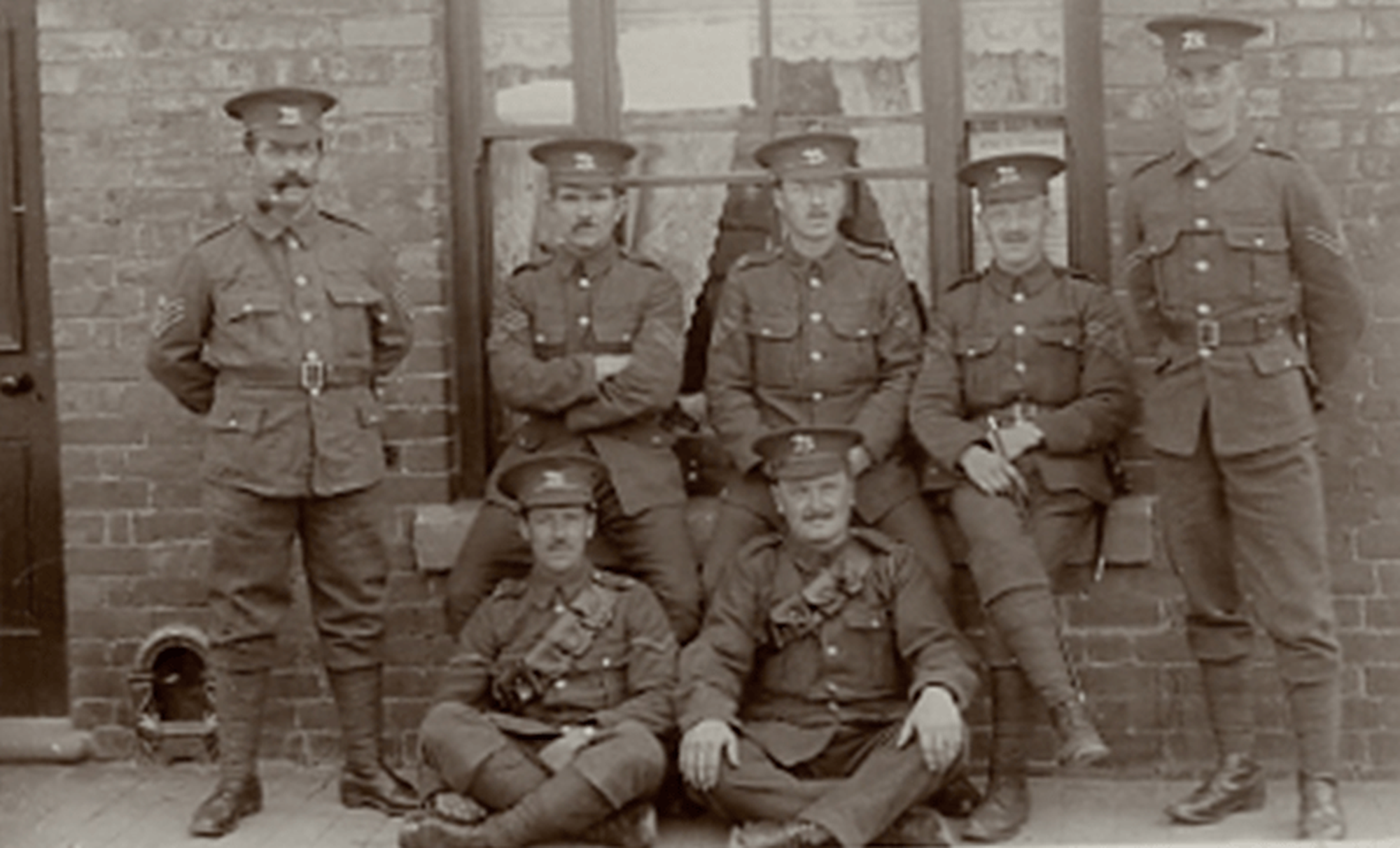 The history of the Herefordshire Regiment during the First World War is shown on these pages. The story starts giving an introduction to the European scene in 1914, it then tells the story month by month giving an overview of the war and then covering the Depot function in Hereford and the activities of the 1st, 2nd & 3rd Battalions, the Volunteer Training Corps (later renamed as the 1st Reserve Battalion) and the Supplementary Company. It concludes with a summary and a list of Casualties and Honours & Awards won by soldiers of the Regiment. A brief account of each of the elements of the Regiment is also given.

The soldiers of the Herefordshire Regiment answered the call and an almost 100% reporting rate was achieved. They concentrated in their local Drill Halls and drew their weapons and equipment. They then marched to the local railway station, generally encouraged by a large turn out of family, friends and the local population; often they were escorted by the town band and the boy scouts and other organisation marched alongside them. They then travelled to Hereford to concentrate as a Battalion. They then moved by train to their war station at Pembroke Dock as part of 158 (Welsh Border Brigade) 53 (Welsh) Division.

A small admin party was left behind at Hereford, which would carry out the ‘home’ depot administration for the Battalion. This party was soon totally overwhelmed by volunteers.

The heady days of August 1914 where in high endeavour, confidence and enthusiasm they were cheered on by family, friends and the community; they marched off to the war that would be ‘over by Christmas’. They had travelled by train to Hereford and then to their war station at Pembroke Dock. By Christmas 1914 nearly 3,000, mainly young men had volunteered for service with The Herefords – so many that a second Battalion was formed. There were few barracks available and soldiers were billeted in private homes. The autumn, winter and spring months were spent in reorganisation and training. The best recruits were selected to join the 1st Battalion and older and unfit soldiers replaced. Then followed intensive training at individual, unit and formation levels; strong friendships were made that would literally last a lifetime.

By Summer 1915 the Battalion was ready and the men keen to get involved; they were warned for service in India but in July voyaged to Egypt, were reorganised and landed on the beaches at Suvla Bay, Gallipoli on the 8 August. This was their battlefield initiation and suddenly the realities of war were apparent. In the first few days they suffered casualties with over a dozen killed in action and over 200 wounded – the war was now real.

They had suffered heat, shortage of water and poor food, difficult ground and constant Turkish fire, and the battlefield had developed into stalemate. Then at the end of November, the winter weather arrived with a vengeance over 350 men of the Herefords were evacuated with wounds or illness, many with exposure and frostbite, perhaps 6 men had died from exposure. When the remnants for the Battalion embarked on the 12 December to leave the peninsula only 79 men answered the roll.

The Battalion recovered in Egypt, receiving back those that recovered and reinforcements from the 2nd Battalion in England. They were firstly employed in the Western Desert protecting Egypt from Sennusi tribesmen from Libya. Then in the Eastern Egypt defences on the Suez Canal and helped repel, at the Battle of Romani, the last Turkish assault against Egypt. The battle had been a turning point and Allied troops went on the offensive crossing the Sinai Peninsula. The Battalion shared in the defeat of the 1st and 2nd Battles of Gaza. Under the new CinC General Allenby they had been re-equipped, reinforced and subjected to a demanding training programme, but this had paid dividends and despite suffering over 70 fatalities and 150 wounded, at the Battle of Khuweilfeh the Battalion had been successful in holding the high ground and protecting the coastal strip allowing the troops to advance. The advance continued through the bleak Judean Hills. and the Battalion suffered a cold and wet time before being present with General Allenby when Jerusalem was liberated from Turkish hands at Christmas 1917. The Turks were weakening but not yet beaten and the Allies continued to push them northwards.

Then in Summer 1918 a reorganisation of the Army took place to make more troops available for the Western Front; the Herefords left Egypt for Western Front.

When the guns fell silent at 11.00 on the 11 of Nov 1918 the 1st Battalion The Herefordshire Regiment were out of the line ‘at rest’ in the area of Moorseele, in central Belgium about 20 km east of Ypres. The strength of the Battalion is not known but it was probably about 450, in November they had received a reinforcement draft of 37, but lost 162 men to wounds and sickness

Whilst they could now look forward to a return to home, this would not come for a while. The Battalion moved and formed part of the Army of Occupation in the Rhineland. In December the first men were demobilised and were home for Christmas, but the last soldiers would not return until May 1919, when the Regimental Colours were returned to Hereford.

Those volunteers from 1914 who were found to be under age were of the held in the 2nd Battalion until they were old enough (19 years) to serve overseas.

Various reinforcement drafts were sent to the 1st Battalion and also other units.

The battalion was absorbed into the 4 (Reserve) Battalion of the KSLI in July 1917.

The 3rd/1st Battalion was formed in Autumn 1914 - again to handle the large number of volunteers. It became the Depot & Training Battalion for the Regiment, training new recruits and receiving soldiers returning to fitness after wounds and sickness before posting them to an operational unit.

Battalions could form Supplementary Companies and The Herefordshire Regiment did this in Autumn 1914.  These companies were formed from men who had had previous military service either: Regular, Rifle Volunteers or Militia, who were deemed unfit for active service. Volunteers for the Supplementary Company had served with the Kings Shropshire Light Infantry in India as well as other regular units. They had also served with the Militia and Rifle Volunteers.

Many were elderly and they were accepted as volunteers but were discharged as unfit for further service when the medical standards were more strictly adhered to.

They undertook duties in the UK such as key point guards and prisoner of war camp guards. Men from the Herefordshire Supplementary Company undertook PoW guard duties on the Isle of Man.

Most, if not all members were transferred to the Royal Defence Corps (RDC).

The story of the Supplementary Company is told in the month by month accounts.

The VTC had been formed soon after the outbreak of war in Aug 1914, at that time it was not accepted as being part of the War Department and therefore was independent of WD control and funding. It was a popular means of service for those men who were over military age or those with business or family commitments which made it difficult for them to volunteer for the armed services.

In Apr 1916 the VTC was accepted by the War Department (WD) and battalions became Volunteer Battalions of their affiliated regiments. Their basic remit was to act as Home Defence troops (rather like WW2 Home Guard), and to prepare civilians in advance of their conscription. Service was obligatory in some cases for men whose conscription into the Army was deferred by the local Appeals Board; by 1918 the Volunteer Battalions had some 285,000 members. The Herefordshire VTC became the 1st (Volunteer) Battalion The Herefordshire Regiment.