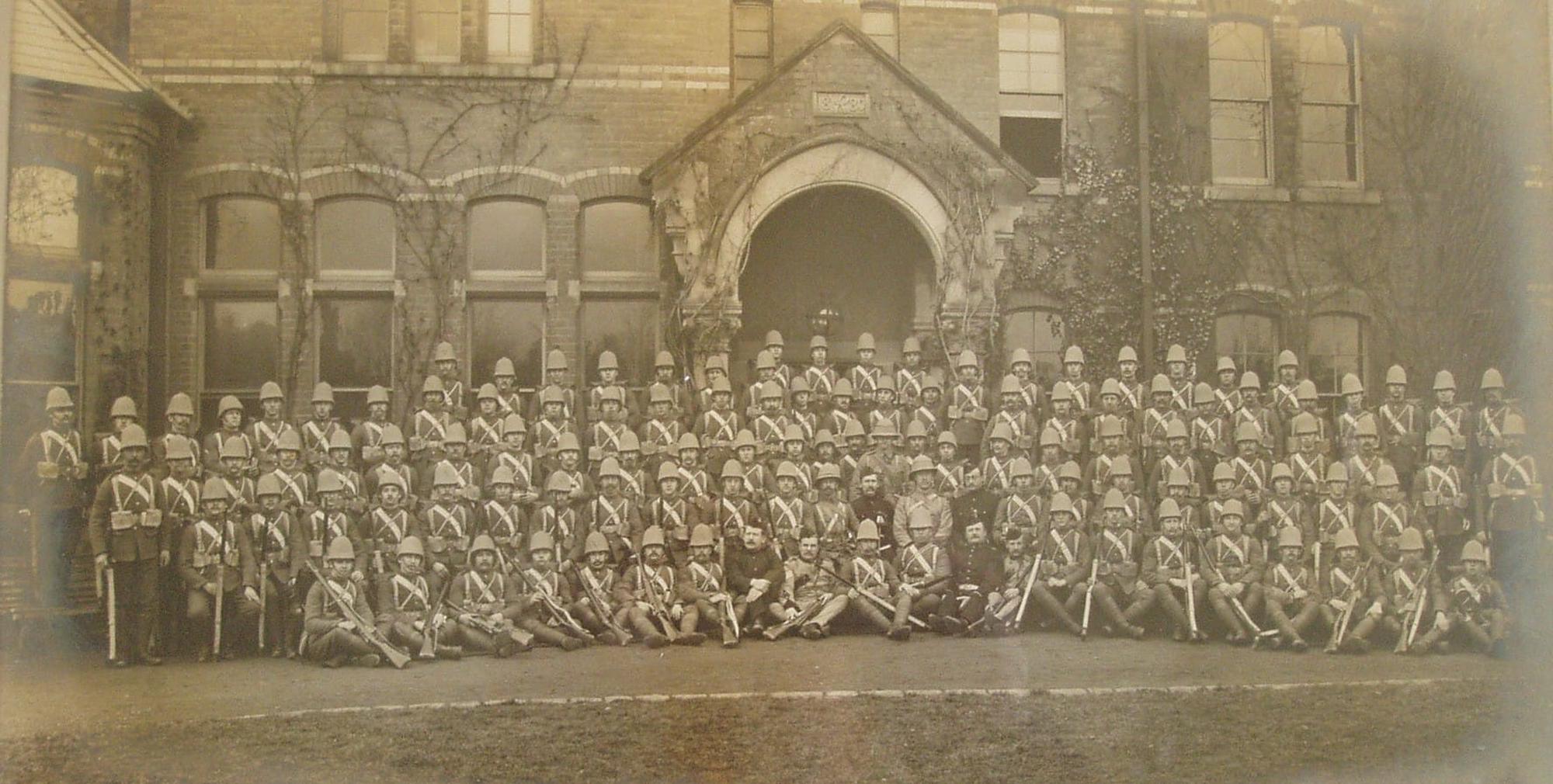 The Company formed up at Copthorne Barracks, Shrewsbury, but owing to the shortage of accommodation some of the volunteers were billeted in the town. The men were clothed in khaki field service dress and equipment with the Wolseley helmet. After forming up, being equipped and trained they sailed for South Africa on 3 March 1900 on board the SS Ninevah and joined 2nd Battalion KSLI (Late 85th KLI) (2KSLI) (the Battalion had been on active service since 1 December 1899 and had taken a prominent part in the Battle of Paardeberg on 27 February 1900, in which Gen Cronje and his entire Boer Force were captured), at Jacobsrust in the Orange Free State on 2 May 1900. 2KSLI was commanded by Lt Col James Spens, and it formed part of 19 Brigade, part of 9 Division commanded by Maj Gen HL Smith-Dorrien. They participated in the march to Pretoria and the advance on to Barberton and received their baptism of fire at Zand River and fought at Vredfortweg, Rhenoster Spruit, Howling Spruit, Krugersdorp, Oliphants Nek and Barberton. They marched for more than a thousand miles and shared fully in the engagements of the regular battalion.

1st VSC left 2KSLI at Belfast in the Transvaal on 18 October 1900 after serving in the Transvaal, Orange Free State and Cape Colony, it sailed for home on 9 April 1901, arriving on 10 May. On the departure of 1st VSC Maj Gen Smith-Dorrien published a Special Order on 18 October 1900, in which he 'thanked the Company for their hard work and wished them a safe and speedy journey home'. LtCol James Spens, commanding gave them an excellent report: 'From the time the 1st VSC joined my Battalion it has shared equally with the other Companies. . . and it has come out of the campaign with flying colours.'

The following is a press cutting from the Hereford Times, dated May 1901: THE DOINGS OF THE SHROPSHIRE VOLUNTEERS IN SOUTH AFRICA

Now that the men have returned, it will be interesting to quote what the commanding officers under whom they have served have said as to their conduct in the field, and also to give a brief summary of their doings.

At the commencement of June last, the 19th Brigade was made up of the Duke of Cornwall's LI, the King's Shropshire LI, the Gordon Highlanders, and the Canadian Infantry, and on the 5th of that month, the Brigade Orders contained the following: ‘The 19th Brigade has achieved a record of which any infantry may be proud. Since it was formed on the 12th February, 1900, it marched 620 miles, often on half rations and seldom on full. It has taken part in the capture of 10 towns, fought in 10 general engagements, and on 27 other days. In one period of 30 days it fought on 21 of them, and marched 327 miles. Casualties between 400 and 500. Defeats nil. (By order), CP Higginson, Capt and Adjt.’

Lt Col Spens, commanding 2KSLI, in his report of the Volunteer Company attached to his Battalion, after the period named, says: 'They [the Volunteers] accompanied the Battalion from Pretoria on 6th June, and whilst on outpost duty at Vredefort Weg on 10th June, were attacked by the enemy, and one man was slightly wounded by shrapnel. On 11th June, another engagement took place under Lord Methuen near Rhenoster Spruit; no casualties. On 14th June, at Rhenoster, General De Wet attacked the camp occupied by the Battalion, and the Volunteers acquitted themselves creditably in its defence. From Rhenoster, they were ordered to Katsbosch, on detachment duty, under Capt WSW Radcliffe, where they were attacked on 22nd June, 1900, being subjected to a heavy shell fire for six hours and a half, but having previously entrenched thoroughly, no losses were sustained by the Shropshires, although the Canadian Mounted Infantry lost two men killed, and one officer and three men wounded. The company next proceeded to Krugersdorp, taking part in a stiff engagement at Sterkfontein. On the 30th July, their strength was augmented by the arrival of Lt Harris-Edge, in charge of 20 non-commissioned officers and men, who joined at Fredericksstad, their arrival being marred by a railway accident to the train on which they were travelling, it having been wrecked by the BOERs, three Volunteers were killed and four injured. The Company afterwards took part in forced marches under Lord Kitchener, covering 244 miles within a fortnight, in an abortive attempt to capture De Wet, and they eventually reached Pretoria for the second time on 25th August 1900. They also marched from Belfast to Carolina, and formed part of General French's force operating from the latter place to Barberton. This ended the active part of their services with the Battalion, and it must be admitted by all ranks that each individual performed his arduous duties, marches and fatigues in a manner highly creditable to their country and themselves.

Lt Col Spens adds: 'From the time the Volunteer Company joined my Battalion, it has shared equally with the other companies every duty which they have been called upon to perform, and whether in camp, on the march, or in action, it has come out of the campaign with flying colours.'

The Ross men who have been under Lt Cutler, speak highly of the bravery which he always exhibited under fire, and Lt Col Spens says of him 'that he has carried out his duties to my satisfaction'.
Most enthusiastic welcomes awaited members of 1st VSC on their return home, and in every town an official reception was arranged.

Pte G Cox was in the leading section of 1st VSC on 27 May 1900 when 2KSLI marched to and crossed the Vaal River at Boschbank Drift, the Volunteer Company being given the honour of leading the Battalion into the Transvaal. FM Lord Roberts of Kandahar VC, on noticing Cox's unusual Volunteer shoulder title 'HF', asked what regiment he belonged to; Cox proudly: 'Herefordshires, Sir'. Pte Cox later acquired a pet monkey named Jacko at Barberton, which accompanied the Herefordshire detachment home. It was ultimately presented by Lt Head to London Zoo.