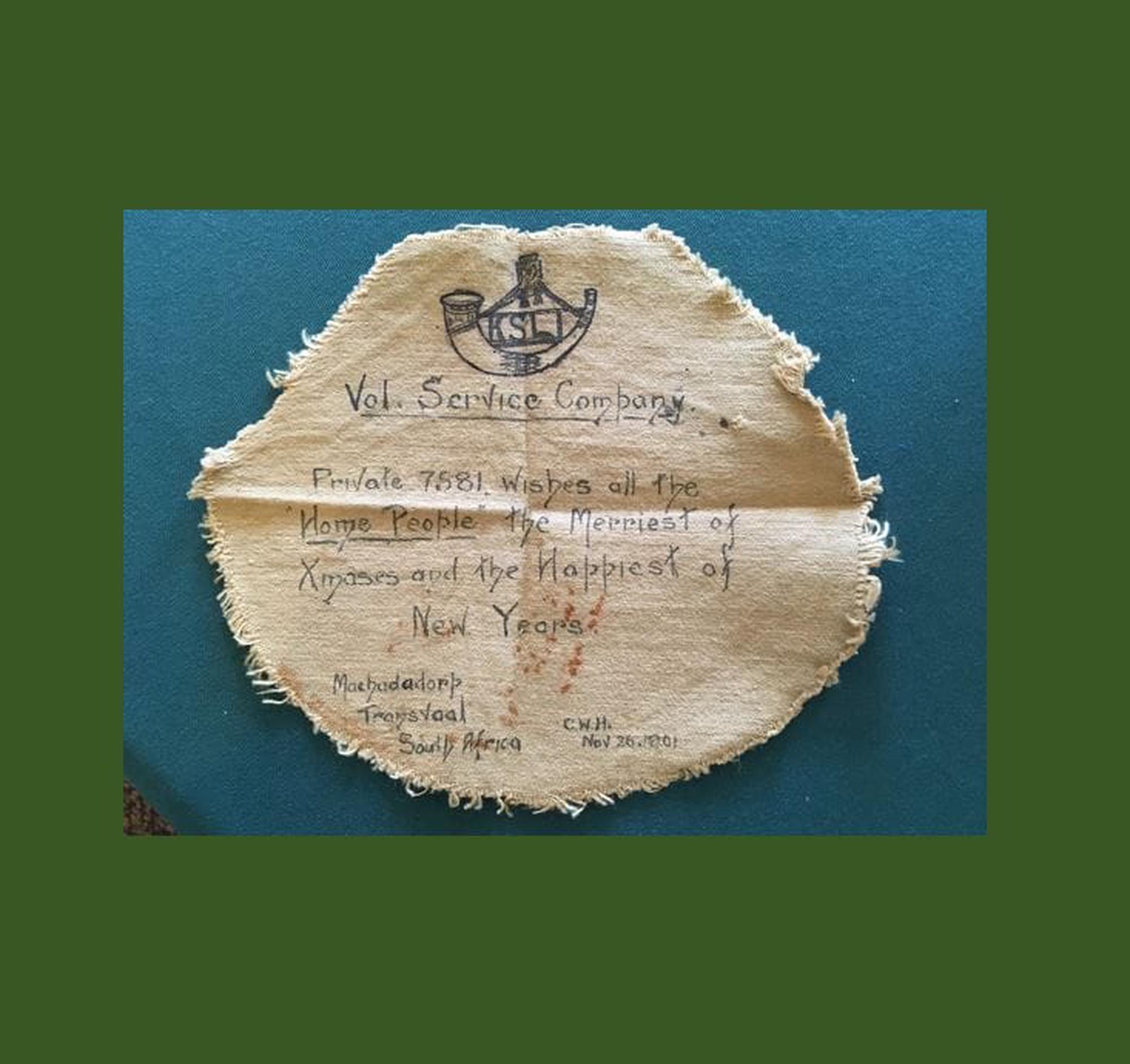 2nd VSC was raised to replace the 1st VSC having, who having enlisted for one year, their period of service was nearly completed. The war fever had cooled down and it was not likely that there would be any important battles, and living in block-houses or moving about the country in small detached columns did not appeal to that martial spirit which was so much in evidence twelve months earlier.
1st and 2nd Volunteer Battalions KSLI and HRVC again each provided a detachment for 2KSLI, which was formed at Copthorne Barracks, Shrewsbury, in 1901. The company of 116 all ranks was commanded by Capt BW Treasure (1st Volunteer Battalion KSLI) and the subalterns were Lt Percy Anthony (1st HRVC), who commanded the Herefordshire detachment, and Lt H Mansell (1st Volunteer Battalion KSLI). 2nd VSC was stationed at Copthorne Barracks, Shrewsbury, but a large number were billeted in the town, including some at the Lion and Pheasant Inn, Wyle Cop, Shrewsbury.

The company was clothed in khaki service dress with slouch hats. Once trained, it sailed for South Africa in March 1901, and disembarked at Cape Town for duty with 2KSLI on 29 April 1901. During this period a new type of warfare was introduced. Until then the battles had been fought with the object of occupying positions, but, now that the British Army was in possession of the whole railway system and most of the large towns, nothing was to be gained by driving the BOERs from positions which it was not afterwards intended to hold. Success in the future was to be judged by the numbers of Boers killed or taken prisoner. 2nd VSC therefore spent its year of active service occupying sections of block houses, escorting trains and guarding baggage. 2nd VSC left 2nd Battalion KSLI on 24 April 1902 and returned home on 4 June 1902.

2nd VSC left the battalion for England after a year's service in South Africa. The following letter was published by Maj CT Dawkins CMG:
On the occasion of the departure of the 2nd Volunteer Service Company for England after a years service at the front, the CO wishes to place on record his high appreciation of the patriotic spirit shown by the members of the Coy in volunteering for Active Service at a time when the original excitement, raised by the war, had to a great extent subsided, and also of their excellent behaviour while attached to the 2nd Bn. The work which they have been called upon to do has been of a hard and uninteresting nature, but they have carried it out with credit to themselves and to the Regiment; and the CO desires to thank Captain Treasure and the Officers, NCOs and men of the Coy for the consistent support they have afforded him. In bidding the Coy goodbye the CO hopes the experience they have gained in the field will not be lost, and that the recollection of the days spent in South Africa will tend to strengthen the ties which bind together the various Line, Militia and Volunteer Battalions of the Counties of Shropshire and Herefordshire.